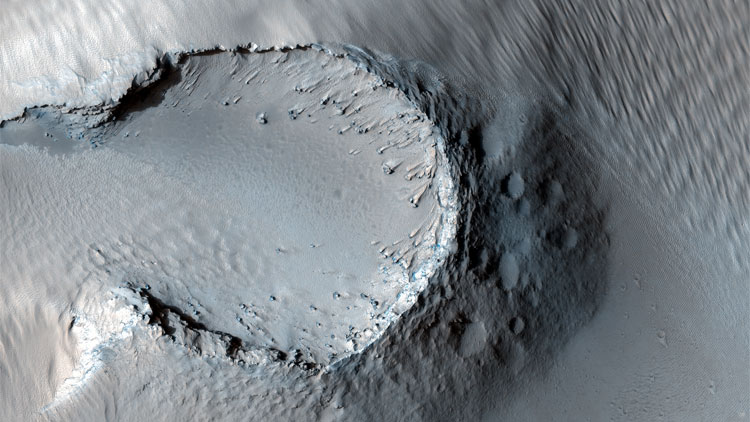 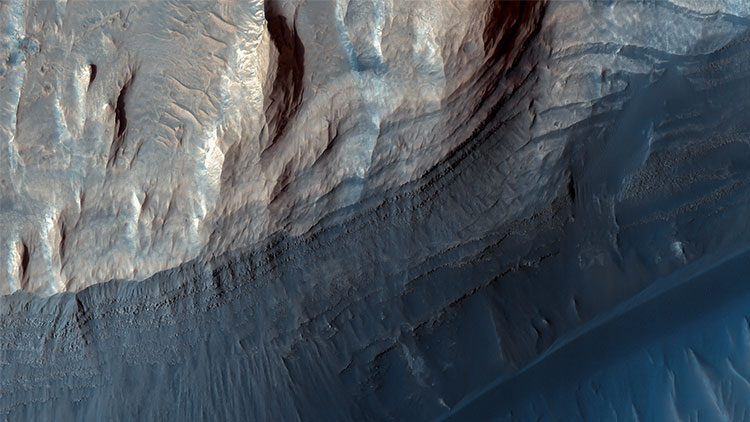 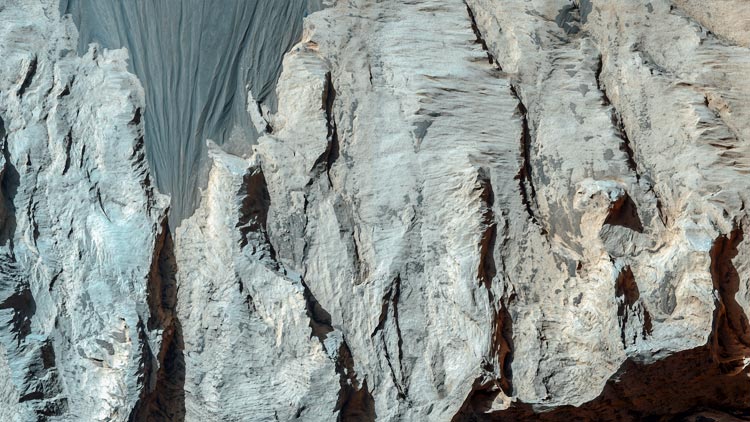 PHONE
1242 × 2208
This formation of light-toned mounds on the floor of Ganges Chasma have been shaped by two erosional processes: landslides and wind.

The steeper sides of these mounds show a spur-and-gully shape which is indicative of down-slope mass movement and slope failures (little landslides). The "top" of the larger, center mound and other areas of the mounds show the streamlined forms of rock carved by eons of the wind at work.

You can also see the pattern of dark dunes that line the Ganges Chasma floor chage as they interact with these mounds, showing a kind of parabolic exclusion zone along the east end of the mounds, indicating that the dominant wind direction is to the west.

These mounds are very similar to the much larger Ganges Mensa formation farther west in Ganges Chasma. These outcrops may in fact be an erosional remnant of a rock formation that filled the whole chasma, with Ganges Mensa being the biggest remnant and this and others being the only remaining outliers. 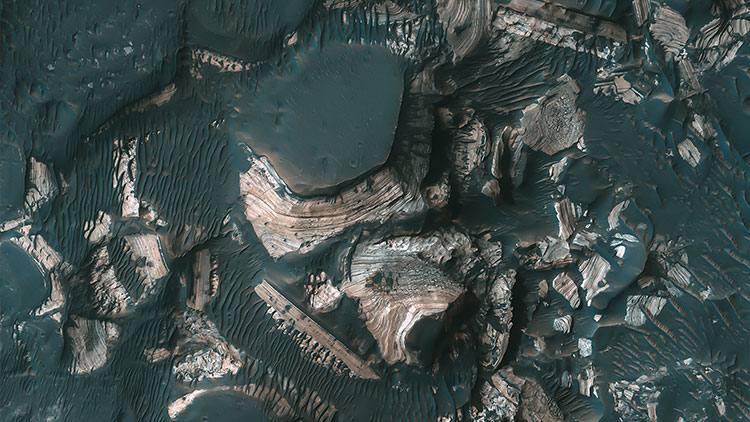 PHONE
1242 × 2208
This image shows blocks of bright, layered rock embedded in darker material that are thought to have been deposited by a giant flood that occurred when Uzboi Valles breached the rim of Holden Crater (Grant et al., 2008, Geology v. 36, p. 195-198).

The magnitude of this ancient flood is indicated by the large size of the blocks (up to 100 meters across). The blocks do not appear to have been moved very far by the flood, as they are not rounded.

Holden Crater is one of the four potential landing sites for the Mars Science Laboratory rover, to be launched in November 2011. The bright layered rock in this image probably contain a record of a wetter, warmer period early in Martian history, and are therefore a prime target for exploration.

Icy Layers and Climate Fluctuations at the Martian North Pole. 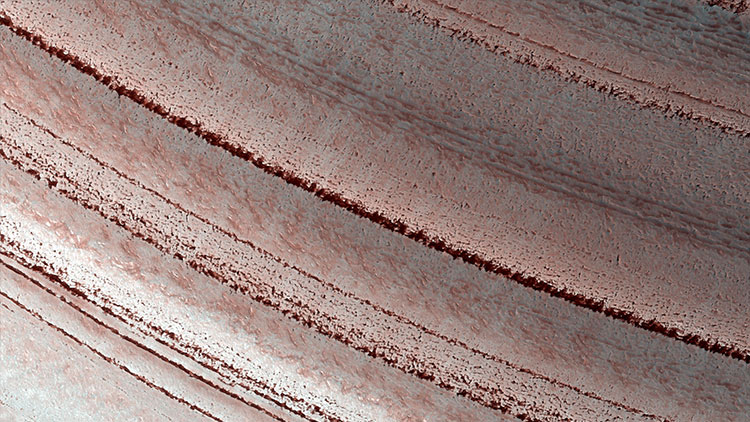 PHONE
1242 × 2208
Sometimes icy layers can be ablated away during warm climates. Later the ice sheet can be buried by new ice layers and grow in size again; it's likely that many of these cycles have occurred over the ice sheet's history.

The Martian North polar layered deposits are an ice sheet much like the Greenland ice sheet on the Earth. Just as with the ice sheet in Greenland, this Martian ice sheet contains many layers that record variations in the Martian climate.

These sorts of fluctuations in the thickness of the ice sheet are most pronounced at the edges of the sheet where this HiRISE image was taken. The ice sheet ends here in a gentle scarp that slopes about eight degrees downhill from bottom to top in this image. The layering within the ice is exposed on this sloping surface; the thickness of the ice here is about 1 kilometer (about 3300 feet). Scientists are analyzing these layers to see what information they might hold regarding previous Martian climates.

Most of the layers are parallel to each other. However, if you look more closely at the layers near the base of the slope then you can see that they are orientated at odd angles to each other. This happens when the ice sheet undergoes the fluctuations in thickness described above. Ice is ablated away and the new ice sheet surface cuts at an angle through several layers. When ice starts being laid down here again, it is in layers parallel to the surface and so at an angle to the older layers. Much later this sloping surface was created by erosion and gives us a cross-sectional view of all the layers and the angles they make with each other. When sloping layers are truncated by flat ones like this geologists call it an angular unconformity.

This location is especially interesting because the ice sheet partly covers an impact crater that is about 17 kilometers (about 10 miles) diameter. You can see the rim of this crater on the flat terrain in the top quarter of the image. The curving crater rim is partly buried by the ice sheet here. The slopes within the crater caused the lowest elevation ice layers to be tilted and probably led to the abundance of angular unconformities at this location. 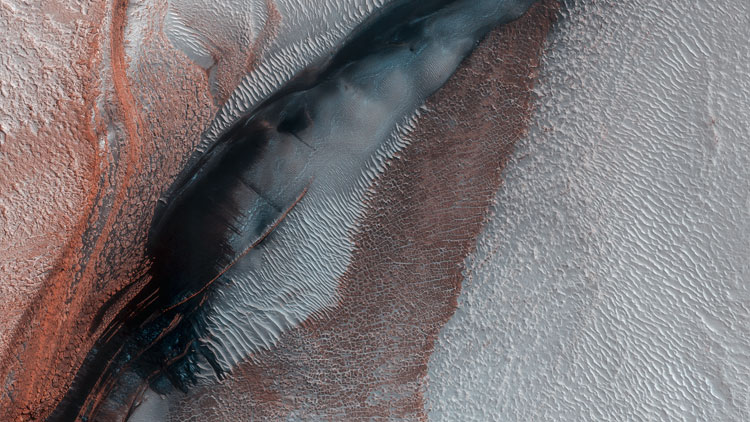 PHONE
1242 × 2208
Like Earth, Mars has seasonal polar caps that grow in the winter and retreat in the spring, but on Mars the seasonal caps are composed primarily of carbon dioxide (dry ice). Carbon dioxide is the major component of the Martian atmosphere, and a significant fraction of the mass of the atmosphere is cycled through the seasonal caps every year.

This image shows sand dunes that are mostly covered by seasonal frost/ice in the northern spring. When the springtime sun shines on the ice, some of it penetrates to the base of the ice and warms the dark sand dune surface below. The warm sand evaporates the carbon dioxide ice from below, building gas pressure that apparently breaks the ice and carries sand to the surface as the pressure is released. The sand then cascades down the surface of the ice, forming the streaks seen in this image.

Star birth in the extreme. 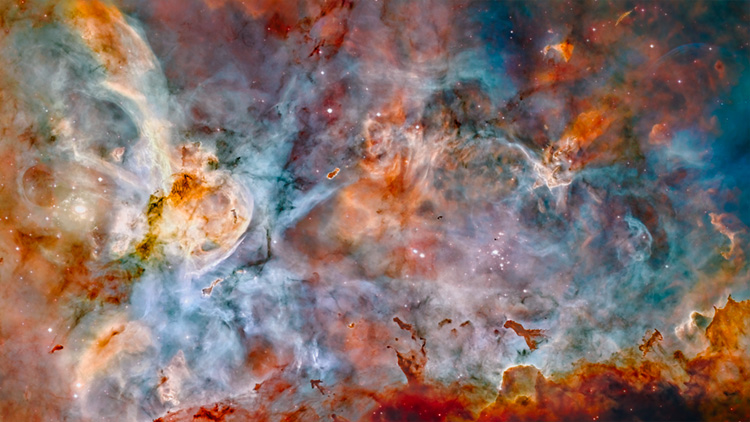 PHONE
1242 × 2208
Hubble's view of the Carina Nebula shows star birth in a new level of detail. The fantasy-like landscape of the nebula is sculpted by the action of outflowing winds and scorching ultraviolet radiation from the monster stars that inhabit this inferno. In the process, these stars are shredding the surrounding material that is the last vestige of the giant cloud from which the stars were born.

This image is a mosaic of the Carina Nebula assembled from 48 frames taken with Hubble Space Telescope's Advanced Camera for Surveys. The Hubble images were taken in the light of ionized hydrogen. Colour information was added with data taken at the Cerro Tololo Inter-American Observatory in Chile. Red corresponds to sulfur, green to hydrogen, and blue to oxygen emission.

The Carina Nebula (also known as the Great Nebula in Carina, the Eta Carinae Nebula, NGC 3372, as well as the Grand Nebula) is a large bright nebula that has within its boundaries several related open clusters of stars. It contains the two large OB associations Carina OB1 and Carina OB2. Carina OB1 contains the two star clusters Trumpler 14 and Trumpler 16.

Trumpler 14 is one of the youngest known star clusters, at half a million years old. Trumpler 16 is the home of WR 25, currently the most luminous star known in our Milky Way galaxy, together with the less luminous but more massive and famous Eta Carinae star system, and HD 93129A. The nebula lies at an estimated distance between 6,500 and 10,000 light years from Earth. It appears in the constellation of Carina, and is located in the Carina–Sagittarius Arm. The nebula contains multiple O-type stars.

The nebula is one of the largest diffuse nebulae in our skies. Although it is some four times as large and even brighter than the famous Orion Nebula, the Carina Nebula is much less well known, due to its location in the southern sky. It was discovered by Nicolas Louis de Lacaille in 1751–52 from the Cape of Good Hope. 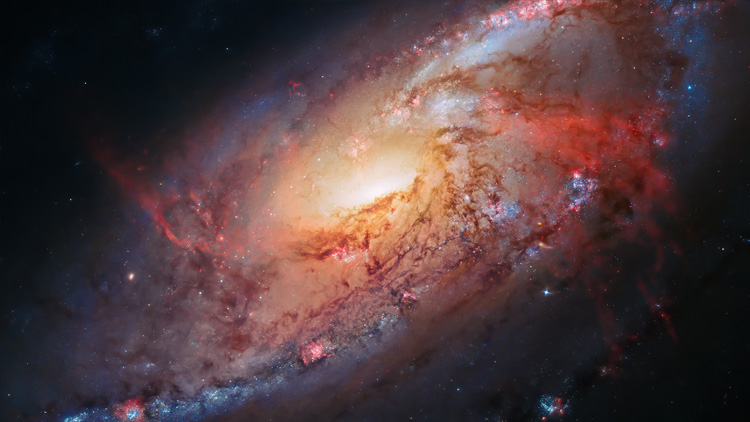 Messier 106 (also known as NGC 4258) is a spiral galaxy in the constellation Canes Venatici. It was discovered by Pierre Méchain in 1781. M106 is at a distance of about 22 to 25 million light-years away from Earth. It is also a Seyfert II galaxy. Due to x-rays and unusual emission lines detected, it is suspected that part of the galaxy is falling into a supermassive black hole in the center. NGC 4217 is a possible companion galaxy of Messier 106. 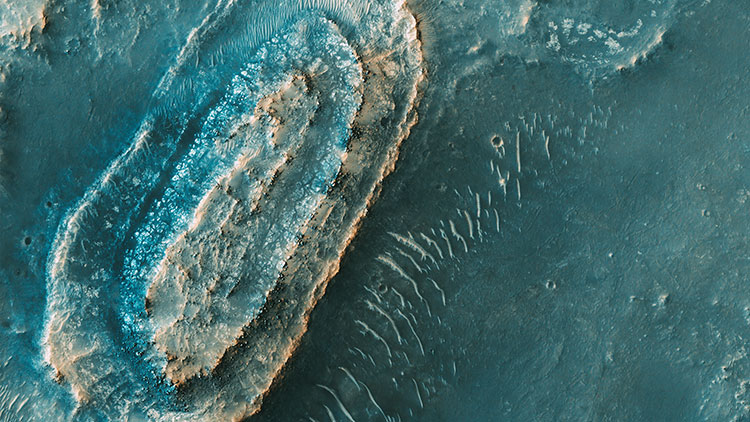 PHONE
1242 × 2208
This image lies in the middle of a candidate landing site in the Northeast part of Syrtis Major, a huge shield volcano, and near the Northwest rim of Isidis Planitia, a giant impact basin.

This region exposes Early Noachian bedrock, more than 4 billion years old, and contains a diversity of hydrated minerals. This would be an excellent place to explore early Mars, when the environment may have been conducive to life.

HiRISE images will help determine if this spot is sufficiently safe for landing--not too many boulders or steep slopes. If it is safe, it may be considered for the 2011 Mars Science Laboratory or the 2018 rovers from Europe and the United States.

Sinuous Ridges in the Aeolis/Zephyria Region. 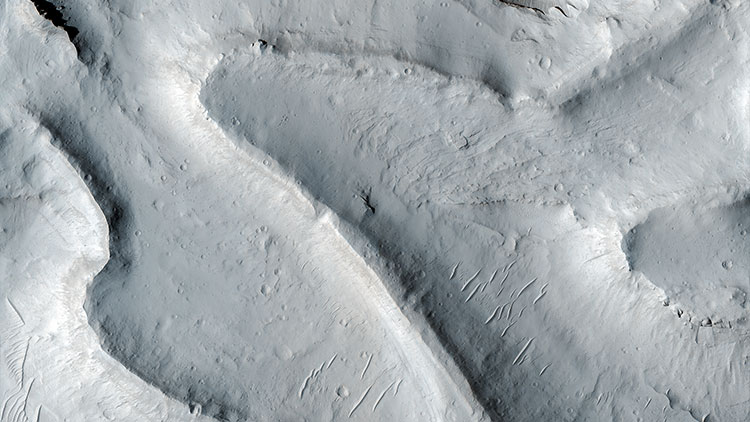 PHONE
1242 × 2208
This image from the Gordii Dorsum region of Mars shows a large area covered with polygonal ridges in an almost geometric pattern. The ridges may have originally been dunes which hardened (indurated) through the action of an unknown process. Groundwater might have been involved.